On March 4, members of the Foundation team and FreeBSD Community headed to Pasadena, California for a packed agenda of FreeBSD activities at SCALE x18. Taking 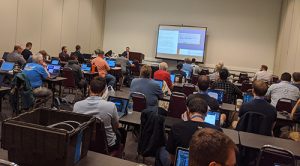 place March 5-8, we started the event by teaching an all-day Getting Started with FreeBSD workshop, lead by Roller Angel (FreeBSD contributor), with Gordon Tetlow (FreeBSDSecurity Officer), Justin Gibbs (FreeBSD Foundation Founder and President, and myself. In spite of current events, we had an excellent turnout for the workshop. If you’re looking for something to occupy your time right now, I’ve included the notes, so you can do this at home.

That evening we ran a BoF called Why FreeBSD is For Me. We started at 8pm and continued until the cleaning crew kicked us out at 9:30. Over 15 people attended to learn more about our favorite open source operating system. To encourage attendee interaction, we formed a circle as best as we could around all the tables and just let people jump in with their questions. We had some really thoughtful questions, such as what are our challenges, what SoCs work best with FreeBSD, will the Raspberry 4 be supported, and many more. 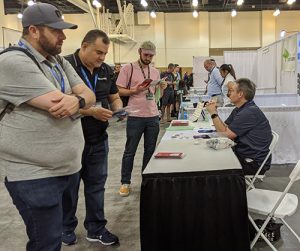 We also had a FreeBSD table in the Expo Hall Friday through Sunday. Even with lower attendance, we still had a lot of people stopping by our table. It didn’t hurt that we had a big bottle of hand sanitizer that we shared with anyone who asked. Many of our students stopped by to tell us how much they enjoyed the workshop. A few students wanted to get into tech, so they felt it was really useful. I had a math teacher wanting to teach some middle school level hands-on workshops, so I’m excited to work with him and get him to one of the BSD conferences. I also spoke with a few people wanting to contribute to the Project and quite a few who wanted to try out FreeBSD on their systems.

On Sunday, I gave my talk FreeBSD, The Other Unix-Like Operating System and Why You Should Get Involved. Unfortunately, we experienced a little technical difficulty at first, with 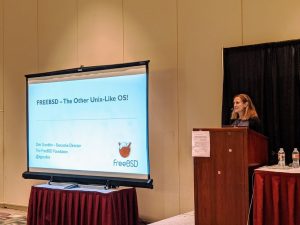 the projector not displaying my slides. Then, after what seemed like hours, I found a cable with a button on the podium and pushed it, which magically made everything work! I see there is a link to my video, but it’s currently not working. I’ll tweet the link, once the organizers make it available.

In the end, SCALE was, yet again, another successful advocacy effort to encourage more people to use and contribute to FreeBSD.

As is the case for most of us in this industry, SCALE was the last event we will be attending for a few months. Don’t worry though, we’re already working on how we can make more on-line tutorials and how-to guides available to facilitate getting more folks to try out FreeBSD. In the meantime, please check out the how-to guides we already have available!

Until next time,
Deb