Are you aware of the tangible benefits derived from our support of the FreeBSD community? In conjunction with our fundraising efforts, we are spotlighting different people on our website and Facebook page who have received funding to work on development projects, run conferences, travel to conferences, and advocate for FreeBSD.

Please enjoy our third installment of our Faces of FreeBSD series!

Let us introduce you to Thomas Abthorpe. We helped him attend BSDCan 2009, 2011, and 2012 by helping with his travel expenses. Here’s his story. 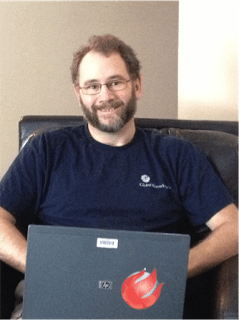 My name is Thomas Abthorpe, and I am a Server Administrator working for the Canadian Government during the day. In my spare time I volunteer with a grassroots movement called Bicycles for Humanity and doing various odd jobs within the FreeBSD Project.  I became a Ports committer in August 2007, doing my own thing for a while, mostly keeping to myself, until I joined the Donations Team.

In my five active years within FreeBSD, I was fortunate enough to be sponsored by The FreeBSD Foundation to attend BSDCan 2009, 2011, and 2012. At these conferences I met developers from around the world, attended DevSummits and advanced my knowledge of FreeBSD in general by attending the talks.

The conference format lends itself well to learning, socializing and camaraderie. I attended my first conference just to learn the process and take in the experience.  At the next two conferences, I was not only there as a participant, but also to also represent [email protected]

I have said time and time again that I am purely a hobbyist in FreeBSD. Because of the generosity of The FreeBSD Foundation, I have been able to meet with other like-minded people and do my part to share my knowledge and friendship.

Donate today to help us continue and increase our support of the FreeBSD Project and community worldwide! Making a donation is quick and easy. To make a donation go to: http://www.freebsdfoundation.org/donate/